Skip to content
HomeBloggingWho Are We?I am the Modern Man. 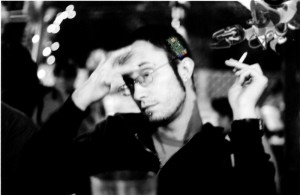 This weekend was all about the modern. Updated the blog-novel and the webcomic just in time to head to SXSWi’s Screenburn Arcade and promo-push my creative endeavors…. I left my ‘business card’ promo’ing the sites on tables, set the homepages of all the ‘connection center’ computers to my pages, flooded public twitter feeds with my bit.lys… y’know, general DIY getting-the-word-out.  Cross your fingers for success!

Went to the ‘Visions’ Digital Media show at Mohawk on Friday.  That was fantastically fun.  Live digital artists projecting their work, in real-time, on giant screens all over the bar, traditional-media artists drawing burlesque horror strippers, deep synth dubs rattling the outside, live bands behind the scare-queens inside, no price-gouging for drinks and a super-short line.  Very pleased.

Went to the io9 TimeBender party on Saturday night… it was lame as hell.  For a party billed as ‘Stormtroopers & Sword Fighting‘, there was a scant amount of either.  Should have gone to Diggnation instead.  Whatev’.  I at least enjoyed MC Frontalot…  as much as I ever enjoy nerdcore, that is (which is… I dunno.  I really love nerdcore in theory, but in practice it always comes off less interesting than it should.  Maybe the culture-jamming with that genre just swings too many ways).  And I returned to my yearly habit of drinking Sparks Caffeinated Malt Liquor, my only drink during SXSW.  That’s right, every year, I willing suck down all the free Sparks people are willing to throw at me, even though it’s disgusting as hell and I wouldn’t dream of ever paying for it.  My first SXSW corporate house-party was sponsored by Sparks, the year the drink made it’s debut, so I’ve created a nice little associate there.  Worst part of the io9lame?  They ran out of Orange Sparks at like 11pm.  Gah!  Still, I love me some io9 blog, so I’ll forgive Gawker for the lame this year.

•Our brains appear to be hardwired for the coming wetwire, so I’ve found yet another way to do nothing but sit in an ergo-chair all day:
http://io9.com/5472619/brain+controlled-devices-work-eerily-well

•Cory Doctorow did a great short-story about the implications of 3-D printers on copyright law.  It’s called ‘PrintCrime’ and I found it in his Overclocked collection.  Regardless, the future is now– 3-D bio-printers, ready to give me a 13-inch dick (portrait or landscape?):

•But if you’ve already got the exoskeleton, maybe you just need the top-coat:
http://io9.com/5481885/robot-skin-is-on-the-way

•And how much of my body can be manufactured before I’m no longer a person, before we starting asking: “Machine or mannequin?”? I mean, when I got my first cavity filled as an adult, I ran around for days claiming to be TrapJaw.  And what will you call such a mecha-embodiment? (btw… in the article is the phrase “PC term for Robots”… the meta-implications [/double entendres] are too much for me… uh… what about the Mac term for Androids?  Oh god… that’s meta, too!)
http://io9.com/5479700/is-there-a-politically-correct-term-for-robot

•Now… what to do with all this new tech?  Oh yeah!  Sex-slaves!  Well, I suppose as long as he’s got a pulse, I won’t care how much is mecha and how much is organic.