I am depressed. … You don’t know me. I am spiteful and alone. I think I have social anxiety disorder. Or maybe not. I don’t know. I’m not in therapy; I’ve never even been to an analyst, though I believe in modern medicine and think everyone could use a little counseling. I’m incredibly superstitious—enough to believe in psychopharmocology at least. (I shouldn’t be superstitious, I have a degree for chrissake, but still, I am.) No, kids, I don’t go to therapy because I don’t want to. You probably won’t understand. You don’t know me, and that’s okay. I can’t really say why I don’t want to go to therapy; the therapists (whom I’m not seeing, but spiting nonetheless) certainly don’t care. I know very well that I’m only hurting myself. Still, if I won’t seek counseling, it’s out of my lonely spitefulness. I’m depressed? Good! Let me wallow in my despair! 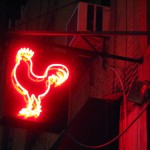 I’ve been like this for a while—fifteen years at least. I’m thirty now. I used to work in the service industry. But not now. I was a nasty StarBucks boy. I was haughty and mean and I liked it. After all, since I didn’t get tips, at least I had to get something out of it. (That was a dumb line, but I’ll leave it in. I wrote it thinking it would be fun and sardonic, but now, realizing that I only wanted to show off my jaded-coolness, I’ll deliberately not delete it.) When customers used to arrive at the front of the line and ask me what kind of bagels we had, I’d frown and snarl and feel such joy if I managed to make them feel small. It always worked. Mostly they were just bland student-types: naturally, since they were in a coffeeshop. But among the fops, there was a certain customer whom I really hated. He simply refused to be bothered, and he always clanged into his cellphone in a loathsome way. I argued with him about that cell phone for over a year. I won eventually; he stopped clanging. This was a while ago, though, back in my college days. But do you know, kids, why I was so spiteful? The whole thing, the worst part, was that I was shamefully aware every time, even the times when I was at my most horribly rude and condescending, that not only was I not spiteful, but I wasn’t really sad or lonely either, and that I was just spitting on frogs to no effect and making myself feel better by doing so. I was blue with contempt, but just flashy a shiny gadget at me or let me smoke a cigarette and I’d have calmed down. I would have been shyly overjoyed, though I’d probably have snarled out of embarrassment and then given myself an ulcer for the next month worrying about it. That’s just how I am.

I was lying just now when I said I was a nasty barista. I lied out of spite. I was just taking a jab at the customers, but I could never really become spiteful. I’ve always been hyper-aware of so many facets of me that are just the opposite. I could feel them gurgling within me, these contradictions. I knew they were bubbling deep down inside me my whole life, just waiting to bust out, but I kept them inside, yes I did, I kept them there on purpose. They picked at me, embarrassed me; they drove me to fits and—and finally I was sick of them, oh how I was sick! Perhaps, kids, it may seem to you that I’m confessing something, asking for forgiveness or absolution for something? That’s probably how it seems… But seriously, I don’t care…

Not only couldn’t I really be spiteful, I couldn’t be anything. Not nasty, not helpful, neither a great guy nor a bastard; neither a bitch nor a hero. Now I spend my days in my little room, needling myself with the pointless notion that intelligent people can never really be anything and that only idiots can become something. It’s true. The burden of intelligence in the 21st century can only be, must only be (because he’s painfully aware of much too much) a whitewash imitation of a person, a character without character; a “good guy”, a person you’d want to hang out with, is a fundamentally stupid being. That’s 30 years’ wisdom. I’m 30 now, and 30, after all, is an entire lifetime; it’s positively old age. It’s awful to live past 30. It’s showy, immature! Who really lives past 30? Honestly? Really? Who? You know who? Only idiots and jerks. I’ll tell them, I don’t mind. I’ll walk right up and tell it to their faces, all those respected geezers, all those silver-haired and well groomed foggies! I’ll tell them all! And I can say it, I have a right to say it, because I will live well past 90! Maybe even 100, or 150! … Whoa, I’m getting to excited…

By now, kids, you probably think I’m kidding—trying to make you laugh. You’re wrong. You don’t know me. I’m not the humorist I appear to be, or might seem to be; however, if you’re getting bored (and I know that you are), and if you want to know who I really am, then I’ll tell you: I’m someone with a degree who still works in a coffeeshop. I work so I can pay my bills and watch my cable TV (and that’s all); and last year, when grandma died and left me my monstrous inheritance, I walked out in the middle of my shift, and immediate bought my one room condo. I used to rent and now I own. It’s a run down, dirt-hole on the sketchy east side of town. I have a cleaning lady (an angry immigrant woman with an accent who’s spiteful out of stupidity). Everyone says that this area, my corner of town, is getting worse yet somehow even more expensive given my fixed and limited means. I know that; I know it far better than the 3rd wave white-flighters and hipster incomers. But I’ll stay right here; I will not leave the east side! I won’t leave here because… Fuck it. Who cares if I stay here or not?

So then, what can a good person talk about with any real joy?

So, let’s talk about me.

A while back, I decided to re-write Dostoevsky’s Notes from Underground. This is this first part. Enjoy, dear readers, enjoy.