Now, kids, what I want to tell you, whether you’re listening or not, is why I couldn’t even be a bitch. Honestly, there were plenty of times I wished I could be a bitch. But the wish never came true. Really, kids, I now know that being connected—“plugged in” as we used to call it—is a disease, an honest-to-goodness, DSMV-worthy, give it a name and a pill-regiment disease. Ordinary human connections would be more than sufficient for ordinary human needs—hell, we could do well on even 1% of the amount of information coming at a modern person living in this apathetic 21st century, especially to one who lives in a wifi hot-city like Austin, 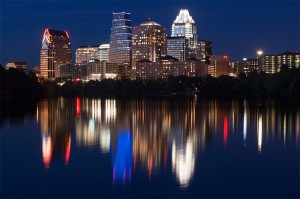 the most halfheartedly connected and techolusting city in the Western World (sure, there more connected cities, but I don’t live in them…those poor s.o.b.s…). It would have been perfectly fine, for example, to have only the limited knowledge and connections that those exciting and lively “good guys” have. You probably think I’m writing this for attention or to make fun of these “good guys”, that I’m just clanging out, like that customer who clanged into his cell phone. But come on, kids, no one could possibly want to expose their darkside just for that dwindling 15 minutes of fame, could they?

Stupid question. Of course, everyone does it all the time; people love their darksides, and I probably love mine more than anyone. Whatever, it’s a moot point. Anyway, still, I stand by my notion that not only is being overly connected a disease, but so is being connected at all (technologically connected, of course… I’m not so grim as to advocate extreme isolationism and hermitage-founding!). It’s true. But whatever, moving on, back to the point. This is what I want to know: why was it that, at the very moment that I was becoming aware enough to “think globally and act locally” to “respect and value the differences” (as we, or they, used to say), that I gave up? That, in fact, I became even more wasteful and biased and… common? I was really awful. I mean, maybe I was no more awful than anyone else, but why was it always that I wanted to be most awful, do the most inappropriate thing, at exactly the moment when I knew I shouldn’t? The more aware I was on how to “act globally” and “respect the differences” the more awful and biased I became; the further I slipped into the despised sludge and the more I felt I really might belong down there. But it wasn’t just a coincidence or a moment of heightened clarity brought about by the juxtapositions of proper and desired actions; rather, it was like it was all coming along naturally… pre-determinedly. It was as if this were just me finally realizing who “me” really was; this was the real me. It wasn’t that my sickness (or depravity or general fuckedup-ed-ness) caused these dark thoughts, they were at the deepest levels of “me”; I had finally worn off the shiny skin veneer to see the truth beneath. Once I realized this, I stopped fighting it. I believed (or very nearly believed) that this was my most true self—this was living honestly. Oh but the horror (the horror!) before I came to that conclusion. It was awful! I thought that surely no one else was going through this, no one else suffering like me, alone like me. I was alone, but to keep from being utterly alone, to take solace in even the simple daily b.s. that people go through, I knew I had to hide it. My shameful awful secret. I even reached a point where I felt a kind of abnormal normalcy; a revolting pleasure in returning home at night to my little east side hovel, hyper-aware that I had once again committed some (or multiple) loathsome act(s) that I could never take back, acutely aware of the ramifications. I couldn’t take it back, I couldn’t apologize or volunteer enough to ever erase the scars I left behind me (even if they were “death of a thousand paper cuts”), and it ate at me, turned me against myself, tore me inside out, devoured every moment of me until at last the bitter bean was pressed into a rich shame and, at last!, actual satisfaction and pleasure. That’s right, actual happiness! Pride, even! 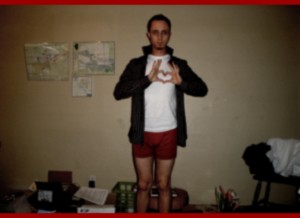 …Really. I’m telling the truth. I’m telling you this because I really want to know if other people do this, too, do others feel the wretched ecstasy as I do? Let me explain. The enjoyment was really just from the intense awareness of my own filth; from the feeling that I had finally gone completely over-the-top, that I had (in jock parlance) “hit the wall”; that I was absolutely wretched. But it could never change; you had no other choice—it’s just who *you* are. And even if you could change, would you really want to? And, supposing you actually did effect that change, what would that really mean, what would you change into? But back to the main point—this is all happening beyond your control; all happening according to some inherent natural pre-determined path brought about by your awareness and connectedness and the suffocation pressing down as a unique and unavoidable consequence of them. Therefore, not only can a person not change, but he (or she or shle) can’t do much of anything at all. Therefore, it also follows, as the logical outcome of this awareness and glut of information, that you have every right to be completely awful (as if this consolation really mattered anyway). But whatever… Ugh. I’ve been rambling. I still haven’t really explained anything, have I? How can I explain this… pleasure…? But explain it I will! I’ll sally on until it makes sense. That is, after all, why I’m typing these words now.

For example, I’m awfully proud of myself. I’m as mistrusting and sensitive as a rape-survivor (victim?); but, there have been times when, if someone would have decked me, I probably would have been grateful for it. For real. I would have gotten some weird kick out of it—the thrill of despair, naturally, but aren’t all the best thrills those that come from despair, especially when you’re incredibly conscious of the good chance it could go from bad to worse at any minute? And that’s just for getting punched. Imagine the sick-joy overload if I would have really gotten beaten up; getting my teeth kicked into the curb might have been orgasmic! Whatever. The point is, I’m always the first one people blame and I’m almost always completely innocent when they do—I’m only following my nature, after all. If anything, the only thing I’m guilty of is being smarter than most everyone else around me. (I know it’s not very humble of me, but I am generally smarter than most people around me. It can be embarrassing. But confrontation is even worse.) Finally, I’m blamed because if there really is any altruism left in me, it only would have highlighted the wretchedness and made me feel even more guilty because I know that altruism is completely useless. The altruism would do nothing for me anyway. I couldn’t forgive someone who punched me; he (she/shle) was just acting out off his (her/shler) nature anyway, same as me, and you can’t really “forgive” bad breeding; and even if you could forgive it, you still would have gotten hit, and it would have hurt all the same. Finally, even if I wanted to “fight back” or seek revenge, I couldn’t do it. I never *do* anything. Why not? Let’s start a new section for that one…

This is Part II of my re-telling of Dostoevsky’s “Notes from Under Ground” (Click here for Part I). This is as far as I got; I may or may not get back to it one day. Enjoy.