Skip to content
HomeBloggingWho Am I?Even in the coffee shop, there am I.

I think I’ve let my existential angst get away from me.

I mean, I’ve known for a while now that this whole angst thing, this thing that made me appear deep and complex— a certain dark sexiness, a radiant weltschmerz (or whatever)— that made it possible to wear plain black t-shirts for weeks at a stretch and somehow always look pretty good and surprisingly appropriately dressed in my middle-late 20s, this angst was at odds —clashing, really— with the old t-shirt and receding bedhead ‘tired suburban dad’ look I’ve been hitting in my early-mid 30s.

But I thought I had it more or less under control. I thought, who doesn’t lie awake on the floor at 3am, wondering if buying kelly green dockers contributes to the decline of civilization via corporate industrial waste? But those dockers look so cute with my purple bowtie! Don’t you, dear reader, have a similarly tortured reaction to the everyday ins and outs of life?

No, I’ve come to see that it’s not under control at all. Not even the illusion of control. You might even say that I am hopeless to do anything about it. The angst is all around and I can do little but try to accept it.

See that? It’s so bad that I don’t even know how to craft a joke anymore. That last bit was supposed to be this hilarious callback-y nod to the existential problem, a Sartre-under-the-tree kind of punchline, a nudge-nudge wink-wink to my dear reader Hunters as I imagine you pulling me back from edge of the jungfrau, but wow. There are at least three or four layers of crap you’d have to slog through first. 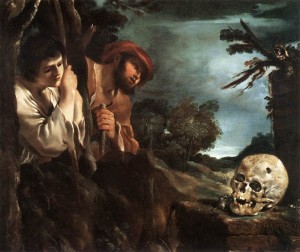 Last semester, a student I’d had the previous semester passed by me on the quad (well, a conceptual ‘the quad’ anyway).
“Hi, professor! Isn’t it lovely out!?”, he said.
“Et in Arcadia, ego,” was my response… Without even stopping to think about it.

EVEN IN PARADISE, THERE IS DEATH.

So I was at the coffeeshop earlier this week, doing my coffeeshop thing, drinking shitty coffee that I paid maybe a little too much for, when this stunningly sexyhot beard bear comes in and sits down at the bar in front of me (as seen above). And at first I wanted to describe him as a “daddie”, but come on. He’s probably a good three or four years my junior. He’s not a daddy, and he’s only potentially a bear. But anyways. How sexyhot was he? Let’s start with his ass. Imagine an ass that’s two axe-handles wide, and at least an axehandle deep. But like, incredibly well-crafted-and-cared-for, hand-carved sugar maple, family-heirloom-quality axe-handles. A big ass, but big in a very good way. The kind of ass that prevents a pair of jeans from closing around the waist properly. Like, the kind of ass that, upon seeing how it commands the barstool it’s been perched upon, you finally understand why barstools are designed like that. Like, and bear (bare?) with me if you’re right handed, but for lefties it’s like the first time you get a pair of left-handed scissors and you’re suddenly like, Oh, holy shit, that’s how these fucking things are suppose to work!. His ass is like that on the barstool. I mean, honestly, I think that’s maybe just how an ass is supposed to work at all– a nice, firm yet supple cushion you carry around with you at all times, so whenever you need a place to sit, there you go. It was the archetype of ass.

And then the rest of him, which I can’t describe quite as well, because he was mostly hidden under this terrible pair of discount $35 Sears sale Levi 569s, and a ridiculous pumpkin colored gingham shirt which I’m certain he bought from like Old Navy in 2008, and these horrendous New Balance knockoff running shoes (which were —without a doubt— some bogo he got online). So the style is fairly terrible, which, again, leads to the “daddie” vibe. And it’s disappointing, because he’s clearly attractive, and even though short sleeve gingham shirts with button-based collar-stays are usually my kryptonite, at least they allow me to see his forearms. And I’ll be brief, but his forearms are, let me tell you, clearly the ass of his upper body. In which I mean they were thick, and firm, and covered in a beautiful dark pelt of hair and looked they absolutely delicious.

But anyway, so he’s sitting there, and I’m sitting there, and I’m thinking. And it’s angsty thoughts that I’m thinking, of course. I’m thinking about finding a job. I’m thinking about my dog’s medication. I’m thinking about the pain of achieving a youthful dream only to find that the reality is gross and ugly and it’s not ever what you’d wanted. Is there such a thing as too late? I know the whole American Dream Spiel says it’s never too late, never too late to follow your passion (guh, I hate that word), but doesn’t that idea– the idea that you can quit your day job to become a writer, or sign up for classes to get certified as a technician and leave your shitty night job– doesn’t that idea require a certain kind of capital? A time-is-money kind of capital that you really do lose as the years pile on? 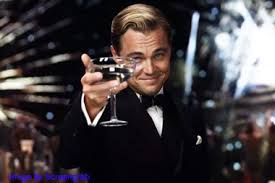 Mind you, I’m thinking all this as I’m following my current passion and unabashedly staring at the beautiful beard bear’s butt.

And I start to wonder about life economics— wondering if there is *literally* a point at which it’s too late to “do something different”. Like when the value on a house goes underwater— is there a negative equity for life? Not necessarily a point at which you should kill yourself (told you I was angsty), but a point at which you can’t reasonably expect to do any better and can only do worse by changing. A point where the minimum payment on your student loan is actually a dollar less than the monthly debt-growth via interest rate, but, like, for your Dreams? I hear you sighing. I hear your rallied cries telling me that it can’t be so, it can always get better, blah blah blah. But not really, right? Isn’t that unrealistic? If it’s true that there are high and low points in life, and it’s true that you can be stable (financially, emotionally, etc.), then it must also be true that some stabilities are on the low side of the curve and some are on the high side. Like Gregor Samsa on the day before the morning he wakes up as a bug. 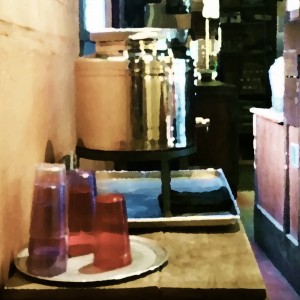 And then the beard bear leaves and I’m still sitting there (because, clearly, even though I was drinking a lot of overpriced cold brew, I’m still dicking so slowly around the internet that it takes me several hours to write just a couple hundred words), and I’ll never have an ass like that, and I might never be happy with my job, and maybe that’s all okay because it could be worse, couldn’t it? And, honestly, that’s all I’ve got. No deep insights, no hook, no denoument. Just that: the image of me, rapidly approaching middle age, slowly molting, wearing a boring-ass t shirt, sitting my boring-ass ass in an uncomfortable chair, drinking slightly overpriced and undergood coffee, inventing strange little stories for the people around me, overtaken by inertia, meh.

Yeah, I’ve totally let my angst get away from me.